The Sherlocks began their journey from England to America. Thomas Sherlock was born in 1811 in Derbyshire England, a year before the War of 1812 in which American and Great Britain would go to war. By the 1830s, the two countries were once again at peace. In the early 1800s, with the development of industrialization in England, social tensions escalated. Industrial workers, known as Luddites, attacked centers of industry around the country.1 Thomas grew up in a world of industrial conflict and changing agricultural restrictions and regulations. By the mid 1920s, train transportation had become a reality.2

Thomas married Emma Doncaster in Duffield, Derbyshire, England on October 6, 1834. 3
Family life in the 1830s to the 1850s in England for a lower to middle class family came with its own share of struggles. When Thomas and Emma became parents, they were expected to fulfill certain cultural roles. Emma entered the role of motherhood in Victorian England brought with hit the societal pressures of domestic life. In addition to keeping a socially appropriate home, she also became the central figure in the lives of her children.4

Thomas was a brick maker by trade in Iowa and Kansas for many years. His work (brick making, plastering, and other general contracting work) can be found in newspapers around the area. Brick making was tedious work in the 1800s. Sand or clay was often collected and the water had to be drained off of it. Water and powder would often be mixed together and then when the mixture was the right consistency the bricks would be molded. Often, the brick moulding process was one that was done by hand. After the bricks dried they were then fired and ready for use! Letters, contributed by Barbara Tandy, demonstrate the importance of this profession to Thomas:
At the beginning of March 1895 Thomas Sherlock wrote Mr. James Ward a letter regarding the construction of a home:

Sir -
I received word from Iowa today saying you were intending to build a large home in the spring. If so I should like to come back and do the job for you. I could come by the middle of April, if that is soon enough. Now I hope you will give me the chance to do your job for you. I will do your job as well and as reasonable as any one. Please let me hear from you soon as I need the work. Hoping to hear from you soon. I am very truly yours.

In a second letter to Mr. James Ward, written at the end of March 1895, Thomas Sherlock wrote:

Sir -
I received your letter some days ago - but was away from home at work when it came; have been as busy I have neglected writing in regard to price I will work as cheap as any one else will either work by the day or job, which ever, you prefer. And if my work is not satisfactory it will cost you nothing. I want the entire job, stone work brick work and plastering. Can be there by the 15th of next month. I am not - in the least - afraid but that I can give you satisfaction, now I trust you will keep teh job for me. I think that will be early enough for Iowa. Well I will close by sending regards to self and family.

Thomas’ work was unpredictable and often seasonal. In addition to the difficulties that came with unpredictable employment, the family did experience its share of tragedy through the years. The Davenport Daily Gazette reported in April 1879 that:

At Homestead Sunday, as Mrs. Thomas Sherlock and Mrs. Holcombe, with their three children, were returing from the Easter festivities at Homestead, in turning around, the carriage in which they were riding was cramped and upset and all the occupants thrown out. Mrs. Sherlock fell in between the wheels breaking one of her legs and being dragged and then run over and fearfully mangled on the head and body. Mrs. Holcomb was thrown over the dashboard and kicked in the side, being it is supposed, injured internally. The children escaped unhurt. The parties were well known in the vicinity and everything that could be applied was promptly done. At last report the victims of the accident were in a precarious condition. 7

In 2004, the wife of Ivan White, the great-grandson of Thomas Sherlock,  wrote on the back of this picture "Mom & Dad; Where and With Whom We Do Not Know" - Charles is in the middle of the first row. Opal is standing behind him. The tall gentleman with the hat is Thomas Sherlock. Charles' Grandfather. 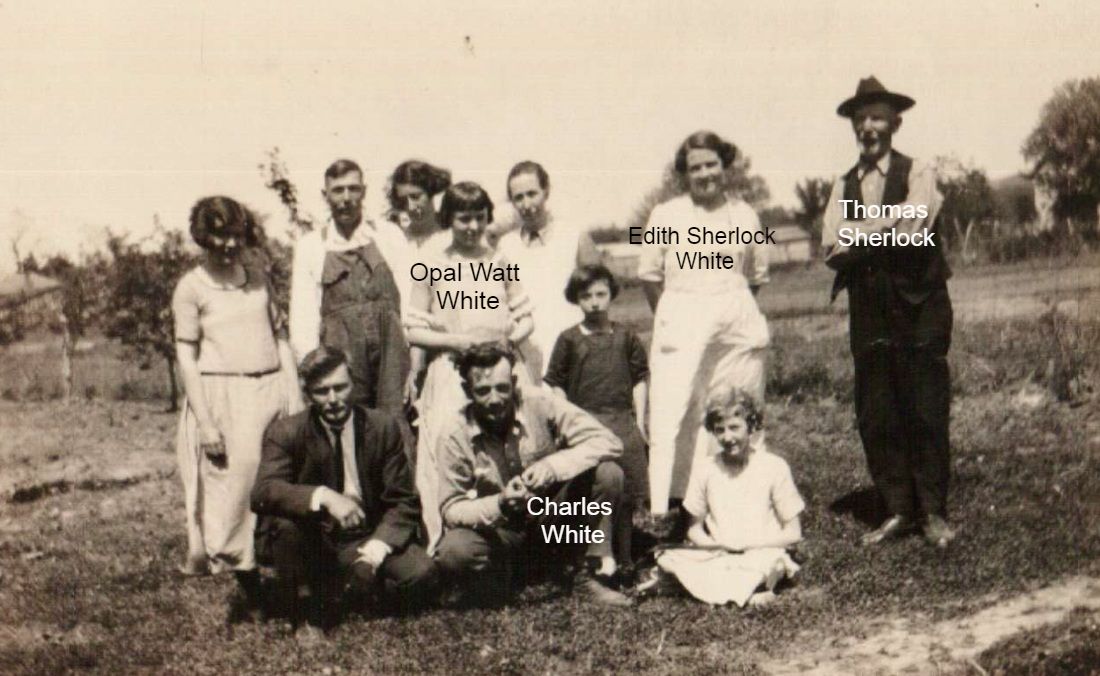 (fig. 6) Sherlock Family
Alice Sherlock died on March 10, 1919 in Verdigris, Kansas. Her obituary, in the March 14, 1919 edition of the Fredonia Daily Herald indicated that this was due to a prolonged illness:

Mrs. Alice Sherlock, wife of Thos. Sherlock, who lives north of town passed away March 10th, after several months of suffering. Mrs. Sherlock was born in Ohio on February 27, 1851, and died March 10, 1919. She was well known in this vicinity, having lived here for a number of years and counted her friends by the score. The funeral took place from the home on Tuesday, followed by a large concourse of friends who deeply sympathize with the family in their bereavement. All of the chidrhen [sic] were present consisting of the following: Mrs. Edith White of Chanute, Mrs. May Kelly of this place, and Mrs. Ethel Keller and Edward, Joseph. Frank, Lee, and George, besides several grandchildren. Charles Colby and daughter of Sedan, Kan. The remains were laid to rest in the Coyville cemetery.