Scottish or Norman in origin.

Samuel Hamill was born in 1791 in Blout, Tennessee. He married Katherine Best. They had nine children. According to a history by Susie Hamill Smith:

Samuel Hamill came to Hamilton County in 1832, making the voyage down the Tennessee River with his family in a flat boat, bringing all household belongings, and as much livestock as possible. He landed on the northside of an island in the river near the mouth of the North Chickamauga Creek. The island is not inundated by the waters of the Chickamauga Lake. He later bought several hundred acres of creek and river bottom land...He also purchased land in the Fifth Civil District. He was a school teacher before coming to Hamilton County. He taught all his sons and daughters at home, giving them a good basic education. He kept good books and current literature for their use. he did not believe in slavery and would not own any slaves. He was elected Justice of the Peace in 1836, and held that office until his death in 1857. After the death of his first wife, he married the second time to Rachel Lea, their two children died in infancy. Samuel Hamill was an active member of the old line Presbyterian Church, and was one of the founders of Baker Creek Meeting House in June 1836. 1

One of the children of Samuel Hamill and Katherine Best was Robert Henry Hamill. He was born in 1821 in Blount County, Tennessee. By 1850, he was living in District 27, Hamilton, Tennessee. He remained a resident of Hamilton his entire life. He died in 1884. During his lifetime, he married Mary Collet (Polly) Hixon. They had eleven children. Mary's will, completed March 20, 1900, lists seven children:

I Mary C. Hamill and of age 73 years and of sound mind and memory do make publish and declare this my last will and testament in the manor following: First:~I give and bequeath to the folowing [sic] named persons, Samuel H. Hamill, Margret C. Hamill, Ephraim J. Hamill, James G. Hamill, William H. Hamill, George W. Hamill, and Henry C. Hamill, that the above persons shall share equally in the same. Second:~I give and devise to the said persons being seven in no and the same shall have all of my real estate in Hamilton Co., and that the same named peresons [sic] shall as near eaqualy [sic] as possible, further more Margret C. Hamill shall have the homestead and sufficient land attached to make her eaqual in first division. Then the said Margret C. Hamill shall have an eaqual share in the undivided real estate that I may have in said County. Furthermore it is my desire that J.G. Hamill shall take care of M.C. Hamill during her life, and that the said J.G. Hamill shall have the right and title to her property; furthermore I will say that neither of the above named persons shall convey thir [sic] right an title without the consent of a majority of all. To have and to hold the same and the several tracts and parcels thereof to the said named persons and thir heirs and it my request that Charles Hamill have a bedstead and bed and comfortable clothing and one horse. And lastly I do hereby nominate and appoint J.G. Hamill to be my executor of this my last will and testament hereby, revoking all former wills by me made, and direct that my executor shall not be obliged to give security as such. 2

Gertrude was born in 1891 when the family still lived in Missouri. She died at the age of 30 from tuberculosis. She never married and never had children. 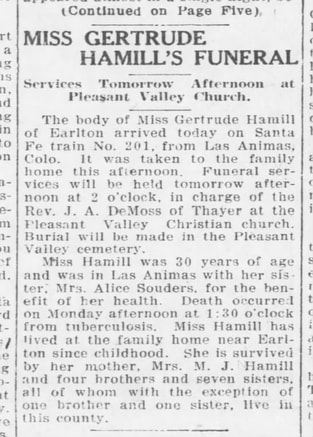 Seven years of marriage and four adorable children living in the little house one half mile from Grandma Watt and one mile from Grandpa Hamill's. All the aunts and uncles to play and tease and also to help with us. We were well entertained and happy.5

The Watt family lived very closely to the Hamill's until George Watt's failing health took them to Holly, Colorado. The children report the sad feelings by their maternal grandparents:

The last night we spent at Grandpa and Grandma Hamill's. With Doll and Amy, our beautiful bay team of horses, hitched to the covered wagon in the road in front of the house, we said our goodbyes, Grandpa saying, "You're taking our babies away". Papa drove around the corner slowly, with the family following, and we children waved from the back of the wagon at least a half mile down the road. 6

The time in Holly was not always positive for this family. A new little one, George, died of Scarlet Fever. Eventually the family would return to Kansas. George and Cora spent their final years in Orange County, California.

1. The history by Susie Hamill Smith was taken from ancestry.com