English in Origin: perhaps a variant of Riddell.

In the name of God, Amen. I John Riddle of Laurence District and State of South of Carolina, being of sound and disposing mind and memory, but weak in body and calling to mind the uncertainty of life, being desirous to dispose of all such wordy estate as it has pleased God to bless me with, do make and ordain this my last will and following that is to say. I desire that my wife Mary shall have all of my estate both personal and real during her natural life time or widowhood except so much thereof as will pay my just debts and funeral experiences which I desire my executors immediately after my death to sell so much of my personal estate and pay said debts. If tehre should not be money on ahnd to pay the same and desire that after the death of my wife Mary Riddle that all of my estate both personal and real be sold by my executors herein after named and the proceeds or moneys arising there from be equally divided between my children hereinafter named. My son Harris Riddle, my son Newton Riddle, my son Melmoth Riddle, my son Berry Riddle, my daughter Catharine Garner, my daughter Elizabeth, the wife of Elihu Garrett, my daughter mary, the wife of John Cannary, my daughter Matilda Caroline Riddle, who is no tmarried. And I do hereby give to my son Berry Riddle whom I hereby make and appoint trustee for my son Fealden Riddle in this my last will to receive for the benefit of the children of my son Fealding an equal shear of my estate with the rest of my children herein before mentioned and named. And I desire that the said shear as above willed and given to my son Berry Riddle for the benefit of the children of Fealden Riddle taken at no time for the payment of my debts that my son Fealding Riddle may owe at the time fo my death, no that he may hereafter contract. And it is also my desire and intention that the said shear of my son Fealding shall not be taken no liable to be taken for any debts that my son Berry may owe or may hereafter contract, but be appointed to the sole use and benefit of the children of my son Fealding as said trustee may think best. And lastly I do constitute my son Berry Riddle and my friend Wm. Power executors of this my last will and testament by me hereto made. In testimony where of I have hereunto set my hand and affixed my seal this 19th day of August 1850. Signed, sealed, published, and delivered as and for the last will and destament of John Riddle as above named in the presents of us.

In 1881 G. W. Thomason and family and R. J. Riddle and family moved to Alabama. The families came on the train to Chattanooga and boarded the steamboat for Guntersville. T. W. Riddle and W. J. Thomason drove a team through to a wagon.

G. W. Thomason settled on the place Mrs. Bettie Hartsfield now owns. The log house still stands. T. J. Leak and O. E. Bryant own part of the place.
George Feemster built the house where G. W. Thomason settled in 1882, [and] G. W. Thomason rented a saw mill from the late Jasper Smith of Warrenton. It was the first circular saw that had been run in this community. Mr. Thomason built a small store house, that Mrs. Hartsfield uses for a barn. They got mail at Warrenton 8 miles away. There wasn’t any Arab then. Mr. Thomason ran a peddling wagon to Birmingham. He kept chewing tobacco, snuff, soda, etc. 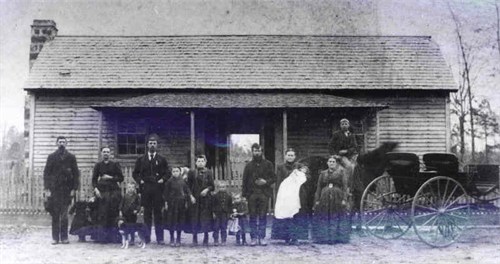 (fig.4) Riddle Family
In 1889 or 1890 he moved to Birmingham and ran a dairy for years. He went into the mercantile business. He was postmaster at Platt, Ala., now Tarrant, was mayor of Tarrant, a Justice of the peace, a steward and Sunday school superintendent. He lived to 98 years old. He and his wife had 14 children.
Rev James Jernigan and family moved out from Shoal Creek the same time the Thomason family moved to Birmingham. He ran a dairy. Mrs. Jernigan was a sister to James Bodine, who died where Elder Haden Copeland lives. Frank Jernigan lives about 3 miles South of Arab, near New Canaan church.
I heard Rev Jernigan say that during the first settling up of Brindlee mountain, along in the late summer time, people would run out of corn, and the hardest time as between grinding and grating time. They would go to the field when the corn was going out of roasting ears, take a piece of tin and drive some holes in it with a nail and tack that on a plank and grate some meal.
Andrew Houston Riddle, or "A.H." was a rural postal carrier on Arab Rt. 1.5  Mary Ella's  son Robert Richard would come to reside with his wife Martha King Cobb on Route 1.

Richard Riddle continued to be very active in his community. The Bank of Arab was established in 1909 and he served as one of the directors.6  In his time in Arab, Riddle was not only the postmaster, mayor, and bank director. He was also an Odd Fellow, a charter member for the Shoal Creek Baptist Church, which was organized in 1886, and a charter member for the First Baptist Church of Arab. He enjoyed serving as a church clerk, as a Sunday school teacher, and as a church deacon.7

Andrew Riddle married Dona Camp (not a close relation to William Camp or his brother, Lloyd). They had the following children: John (1919-) and Bessie (1920-). Andrew had been a Mason during his lifetime, and even served as the secretary to his lodge in 1919.8 He died 1920.

4. Thomason,"Mills and Gins of the Early Days," Arab Historical Society.