Cobb - first found is Suffolk, the Cobb family held a seat found in the Domesday Book. Cobb may also have Anglo-Saxon origins.

After several months of poor health and trips to the hospital, Rev. J.D. Fletcher of Guntersville he was feeling so much better Monday that he started making plans for going hunting, in spite of his 84 years of age. Tuesday night he ate a hearty supper, listened to the late news and went to bed. Shortly after that he was stricken with a heart attack at 9:15 and died a few minutes later, ending a long life as minister, merchant, teacher, and public official. Only Monday night at the Masonic Lodge had decided to use his colorful life as the basis of a "This Is Your Life" program. But Rev. Fletcher never knew of this. Funeral services were held Thursday afternoon at the First Baptist Church in Guntersville by Rev. Bob Isdell and Rev. D. W. Edwards. Burial was in the Memorial Gardens, directed by Carr Funeral Home. The Masons had charge of the graveside service. Survivors include his wife, Mary Mason Fletcher; 2 daughters, Mrs. Fred C. Phillips of Shelbyville, Tenn., and Mrs. Wes Garison of Birmingham; a son, Dr. Robert C. Fletcher of Birmingham; 7 grandchildren and 2 great grandchildren. Another daughter Mrs. John Pritchett of Guntersville died a few months ago...During his more than 40 years of ministry, Rev. Fletcher served many chruches including Mt. Vernon, Solitude, Friendship, Union Grove on Sand Mountain, Mt. Carmel and many others. He was born in Jefferson County where his father was in the railroad construction business. They moved to a 300 acre plantation now in Albertville city limits when Rev. Fletcher was a small boy. He attended the Agricultural School there and started teaching. He taught in a little red school house that stood where Joe Darnell's Garage is in Guntersville and then at Arab. While there, he met and married Minnie Laura Cobb, daughter of the late Robert and Sarah Cobb. They moved to Albertville where he worked for the Dr. Hall Dry Goods Store. He started in the Baptist ministry on Sundays. He was elected tax assessor of Marshall County while there and served in that office 12 years. During his first term, he drove to Guntersville daily in a horse and buggy and carried his lunch wrapped up in a newspaper. His wife died in 1913 and he moved to Guntersville three years later to finish his terms as tax assessor. While preaching at Mt. Carmel he married Mary Mason in 1917. They bought a wholesale grocery business and traveled all over Jackson and Marshall in a T-Model Ford selling groceries. They later bought the general merchandise store and building in South Town from Lon Johnson, formerly the Tom Farrow business. They have operated it together for the last 32 years. Rev. Fletcher was a member of the Guntersville First Baptist Church and an honorary deacon; a member of the Masonic Lodge No. 209 and the Chamber of Commerce. He was a director of the Citizens Bank.

Although Robert and Sarah spent the early part of their married life in South Carolina, they came to reside in Marshall County, Alabama by 1900 with their children. In South Carolina, according to the 1880 Census, Robert was a farmer. In 1900, according to the census taken that year, he was a Marshall County resident. He was still farming to make his living. He died in 1920. Sarah died in 1922. ​

James was born in Austin, Greenville, South Carolina in 1869 to Robert Richard and Sarah. In 1890 he married Mary Ella Mariah Riddle.  Mary Riddle was the daughter of Richard and Julia Cox Riddle.

Benjamin married Noma Bryant (1917-2009). They had the following children: Laudine and Helen.

According to his grandson, James Radford Cobb (the son of Robert and Martha Cobb - see below), James and Mary lived beyond the cemetery and on top of a hill - close to the Cobb grandchildren. Radford remembered running through the cemetery and up to his grandparents house. His grandparents had adopted one of their grandchildren, James. James and Radford were of an age, and often played together. Radford said that his grandmother, Mary, would be sitting on the front porch. He would run up and ask her "Grandma, Grandma, where's James?" She would nearly always reply, "He's around he somewhere."

Mary died in 1937. James Cobb lived for a time with his son Robert and daughter-in-law Martha Cobb before his death in 1954.

Robert Richard Cobb was born in 1901 in Marshall County, Alabama. He married Martha Ella King (1909-1998). They had four children: Doris O'Neal (1927), James (1929), David Logan (1935), and Mary Anne (1946). Granddaughter Kathleen recalled hearing that her grandparents met at a baseball game. She said that her grandmother, Martha, told her that she thought that Robert Cobb was very handsome playing baseball.

He farmed for a living, owning several mules and providing for his family with livestock and harvests. His daughter, Doris, said that she was never aware of the Great Depression because the family always had what it needed. He died in 1988. Martha died in 1998. 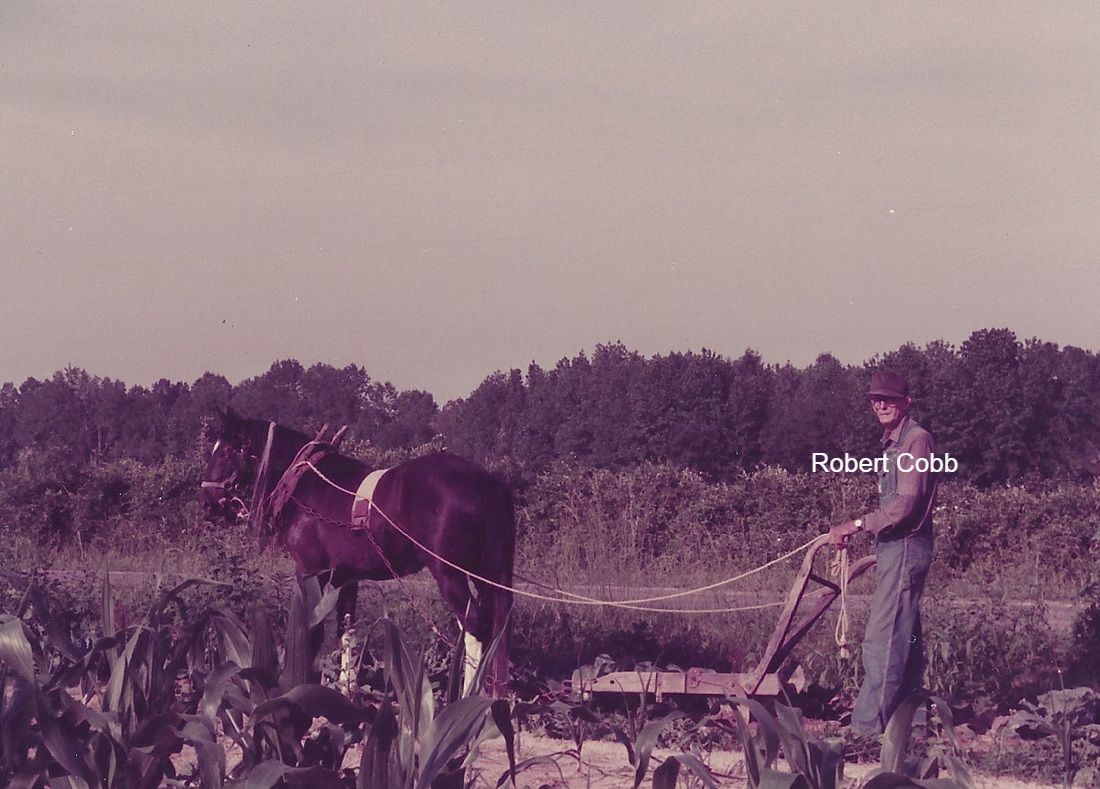 (fig. 4) Robert Cobb and Mule
Doris O'Neal was the first child of Robert and Martha Cobb. She grew up outside of Arab, Marshall, Alabama. She attended Grassy Elementary and Snead Junior College and Alabama Polytechnic (later Auburn University). 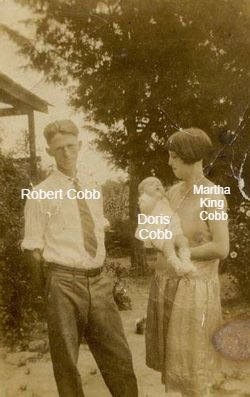 In 1949, Doris married Ivan White. They met at Eglin Air Force Base in Okaloosa, Escambia, Florida. She was a school teacher on the base. Her aunt, Mozelle Cobb, picked the wedding suit from her store in Scottsboro, Alabama. Her uncle, Lawrence Cobb, walked her down the isle. Ivan and Doris had five children: Glenn Allan (1950), Unnamed Infant (1951),  Cynthia Dale (1952), Patrick O'Neal (1954), and Kathleen Susan (1957). The White family moved around the United States due to Ivan's military career. They lived in Houston, Texas; Albany, Georgia; and San Angelo, Texas - to name a few places. Ivan's career also took them to Berlin, Germany in the early 1960s. Doris "Dot" Cobb White died in 2010. Ivan died in 2018. 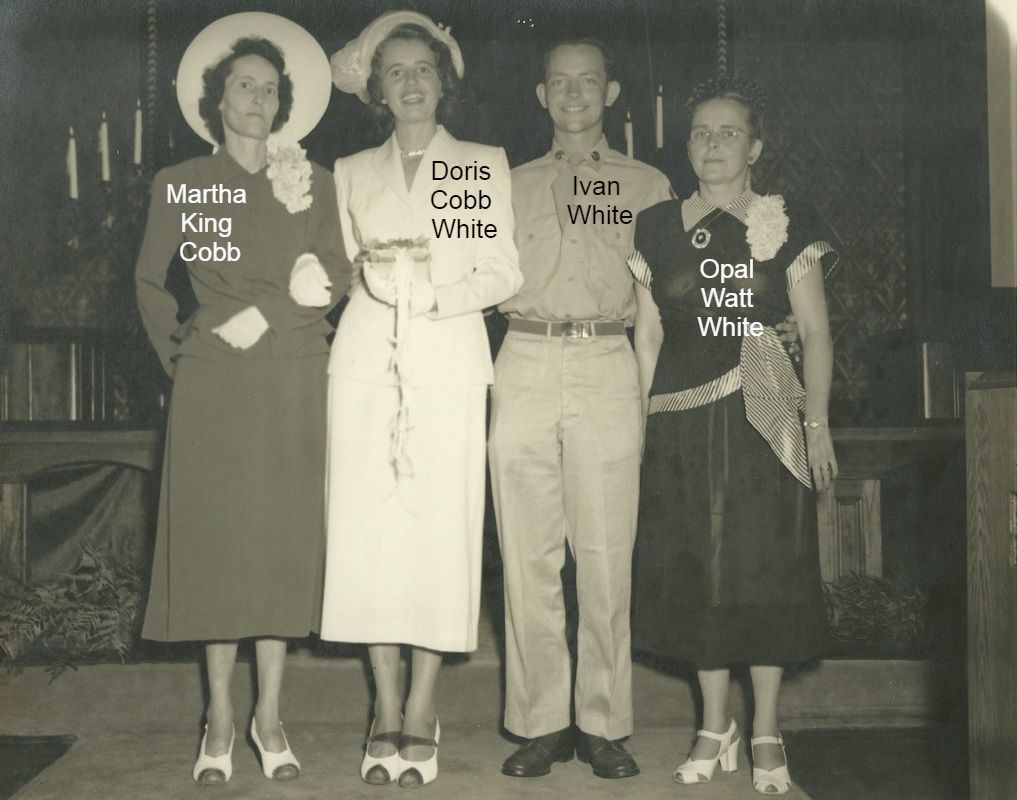 * Robert Cobb and wife, Sarah Cobb, immigrated to Marshall County, Alabama from Greenville, South Carolina in a covered wagon in 1882 to homestead much of what is now Arab, and played a large part in the founding and development of Arab.